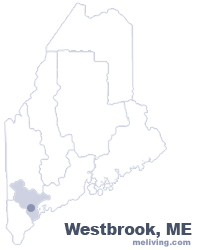 Westbrook, Maine is a suburb of Portland and was named in honor of Colonel Thomas Westbrook who was responsible for obtaining masts for the Royal Navy. He also commanded soldiers during the Fourth Indian War and had good business smarts. He’s also known for building the first paper mill in Maine.

Westbrook, Maine was originally known as Saccarappa, named after the Saccarppa Falls on the Penobscot River. The town was part of Falmouth, until February 14, 1814, when it was incorporated as the town of Stroutwater. Saccarappa Falls and Congin Falls provided power for the town’s early mills. The Presumpscot River flows through the center of Westbrook. The two prominent waterfalls are Saccarappa Falls and Congin Falls. The Stroudwater River flows through the southwestern part of the city which also contains part of Highland Lake.

Notable Westbrook Maine residents include Rudy Vallee (July 21, 1901 – July 28, 1986) who was one of the first pop idol stars of all time. Rudy Vallee was born in Island Pond, Vermont and grew up in Westbrook.