Microbrewing in Maine has been increasing in popularity over the past century. This is because Maine has some wonderful microbrews and motivated people behind them. While some microbrews have been around for a while and are filled with history, others are fairly new and trying to become more well known. Share your Maine Microbrewery comments. To feature your ME business, contact us. 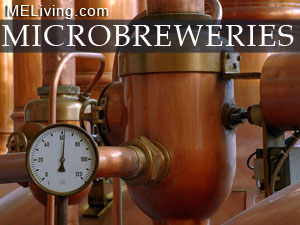 One of the best and most exciting features of the microbrew is how unique the brews often are. The various flavors are often given names fitting for the region in which it is sold, to go along with a theme that the microbrewery has, or the way in which the beer is brewed. Microbreweries tend to use local products to create unique regional flavors for their brews.While there are many excellent microbrews in Maine, the Seadog Brewing Company has some good examples of specialty brews. Their Bluepaw Wheat Ale combines the nutty refreshment of the wheat ale with Maine’s wild blueberries. Their award winning Riverdriver Hazelnut Porter is made with four different malted barleys and a hint of hazelnuts providing a truly out of the ordinary brew.

The term microbrewery was first coined to reflect the size of the brewery. Socially, the definition has since come to reflect an unconventional approach and attitude toward brewing. The technical definition of microbrewery in the United States is a brewery that produces less than 15,000 barrels of beer annually. The prohibition caused many breweries to consolidate or shut down entirely.

When prohibition was lifted there were only a few large companies that had survived and they were producing a mild lager. In order to get variety in their beer drinking, many people turned to brewing for themselves and some even grew into larger scale operations. These new microbrews quickly became popular and many microbreweries sprang up rapidly. When a microbrewery and a bar are attached it is known as a brewpub.

With the microbrewery industry steadily growing as well as new and interesting brews arriving each season, finding one to please your palate should not prove problematic. Some other popular microbrews from Maine are Gritty McDuff’s, Black Bear, and Shipyard. So grab a microbrew, sit back, and enjoy.