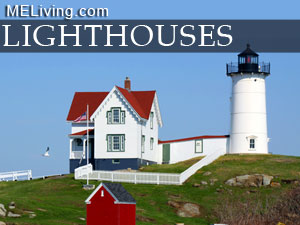 Hendricks Head Light
Southport: The light was first put to use in 1829 and restored in1875. The 39 foot white square tower is located on the East side of the mouth of the Sheepscot River. It is privately owned.

Heron Neck Light
Vinalhaven: This lighthouse was built in 1854 and fire damaged it in 1989. The tower is a 22 foot white cylindrical shape and access is by boat.

Indian Island Light
Rockport: This lighthouse was first built in 1850 and re-built in 1874. This lighthouse stands 31 feet tall. This white square tower is now privately owned and no longer active. It is located on the east side off Rockport Harbor entrance and can be viewed from Rockport Marine.


Manana Island Fog Signal Station
Monhegan: This lighthouse is in the National Register of Historic Places. It was built in 1876 and has a keeper’s quarters, generator building and oil house.

Marshall Point Light
St. George: This white tower is 30 feet above mean high water and stands at the East side of the entrance to Port Clyde Harbor. It was built in 1832 and rebuilt in 1858. Can be viewed from Lighthouse Road off Route 131.

Matinicus Rock Light
Criehaven: Located five miles from Matinicus Island, this lighthouse had the first wooden building and twin wooden towers in 1827. They were replaced by two gray granite towers in 1857. Only the Southern light is operational and is now automated.

Monhegan Island Light
Monhegan: First built in 1824 and restored in 1850, this granite block tower stands 47 feet high and is conically shaped. The tower is located 10 miles offshore Monhegan Island. Can be reached by car ferry from Boothbay Harbor, New Harbor, and Port Clyde. This tower is frequently the subject of artists.

Owls Head Light
Owls Head: The tower of white brick was built in the peak of the headland in 1825. It stands 20 feet above the ground and 100 feet above mean high water. It is located within Owls Head Light State Park. Can be viewed from Lighthouse Road off Route 73.

Pemaquid Point Light
Bristol: This is one of Maine’s prettiest Lighthouses built. This lighthouse stands 32 feet high and is made out of white fieldstone, conically shaped. It was built in 1827 to the West of the entrance to Muscongus Bay. It has been unattended since 1934 and is accessible by car.

Perkins Island Light
Parker Head: This tower was built in 1898 out of a white wooden octagonal structure. Located on the west side of the island in the Kennebec River with a view from Parker Head Road.

Pond Island Light
Phippsburg: This tower is located on an uninhabited Pond Island at the mouth of the Kennebec River. It was built in 1821. The keepers quarters and fog signal were destroyed, but the fog signal was replaced and modernized. This lighthouse is accessible by boat only through the west side of the Kennebec River entrance and can be viewed from Popham Beach. Included in the National Register of Historic Places.

Ram Island Light
Boothbay: This brick tower is 30 feet on a granite caisson foundation and was built in 1883. Located on the northwest side of the island, east side of Boothbay Harbor entrance. Can be viewed from Ocean Point on Route 96, Boothbay.

Rockland Breakwater Light
Rockland: This lighthouse is located on the South end of breakwater beyond Owls Head. This square tower was built on the corner of a fog signal house on a granite pier in 1888. It was rebuilt in 1902. Northside Rockland Harbor entrance

Saddleback Ledge Light
Vinalhaven: This lighthouse was built on a ledge at the entrance to the Isle au Haut Bay. The gray conical tower with a white base and white dwelling attached was built in 1839 and stands at 42 feet high. Ferry available.

Seguin Island Light
Georgetown: This is one of the oldest lighthouses on the East Coast. It was built in 1795 and rebuilt in 1887. It stands on a rocky Seguin Island at 180 feet above mean high water. It is one of the highest beacons in the state. Segual Island has more fog than any other location with the possible exception of Moose Peak Light. It is located two miles south of the Kennebec River mouth and can be viewed from Popham Beach.

Squirrel Point Light
Georgetown: This light was built in 1898. It has a white wooden octagonal tower and is located on Arrowsic Island in the east bank of the Kennebec River. View from Parker Head Road in Phippsburg Center.

Tenants Harbor Light
Tenants Harbor: This Lighthouse was built in 1857 and stands 26 feet high in a cylindrical shape. Located on the east side of Southern Island and can be viewed from the village. Privately owned.

Two Bush Island Light
Two Bush Island: This light stands at the entrance to Two Bush Channel off Tenants Harbor. It was put to use in 1817. 42 foot white square tower.

Whitehead Island Light
St. George: This lighthouse was built by order of Thomas Jefferson in 1807 and it was rebuilt in 1852. It is located at the South entrance to Mussel Ridge Channel. It has a 34 foot gray granite tower attached to a red brick service building. Off Tenants Harbor.